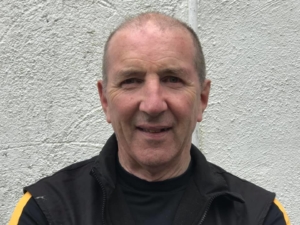 It seems like a half-century ago… Wait… It was! 1967 was the year
I first set foot in the Bish rowing club. I rowed there until 1971;
campaigned for a year as “old Bish” Senior Four, then, UCG/Corrib, and finally GRC before retiring somewhat burned, out I imagine, in 1975.

A 15 year period abroad saw no regular rowing other than sitting in for
the “Presidants Cup” (that is indeed how it is spelled), on St Stephen’s
Day if I was home for Christmas.  Then, on turning 40, I quit my job, did not buy a sports car, but responded to Noel Leader’s suggestion that we go for a spin on Sunday mornings.  25 winters have flowed over the Wier since then, and the vets can be seen to turn out for their Sunday morning row.

My best friend at school, Tom O’Chaughnessy, after whom the eight is
named, had an older brother who rowed. For some unknown reason the idea of following his example appealed to us, and so we signed up.

I had no natural talent with stick or boot but the oar seemed to
fit my hand fine.  Why start? Why continue? Initially there was the competition and the rewards. Later it was a superior alternative to jogging,  and more competition and rewards. Of course maintaining a level of fitness for one’s own health and well-being cannot be discounted.

Even If you’re working hard in the boat, and the Corrib is like glass,
and the boat is shifting, and the crew is as one, and you can hear
the bubbles under the hull., And you can say that was a cracking
piece! And of course you want to come back for another one.
(Golfers who birdie the 18th understand the sentiment).

I have always tended to be in the stern. Seven in the Bish eight
behind Noel Leader in 1969 and ’70 and then later at stroke, myself.  I rowed bowside for a few years and then moved over to strokeside.  I sometimes wonder whether this ambidexterity is a blessing or a curse.

Then there is sculling. Not a part of rowing back in the day.   Gerry Small and I availed that fantastic summer of 1996 to learn to scull and then fine-tune our technique and the boat rigging to the point where we had a very fast and very competitive package.  I guess the stroke seat of that boat must rank as my favourite seat.

There have been a few. Back in Bish, the 1971 crew had finally been caught and well beaten by Jes in the early-season races. Our Coach moved me from 7 to 6 a week before Trinity regatta. We lost by halflength.  He then moved me to the stroke seat for Limerick regatta one week later. No pressure! We won by a canvas.

Years later I was working away in Manorhamilton during the week. I trained alone in Sligo gyms while the rest of our Masters crew worked away in Galway.  One hour pieces alone on the rowing machine can be a lonely place!  But it worked we took home two gold medals from the World Masters in Prague 2002.

5. What is one thing you would like to learn/improve? Top goal.

Goal: I have rowed and raced in each of the last six decades, from the 60s to the “teenies”. Health permitting I’d like to continue this deep into the 20s and perhaps beyond.

There been many.
First championship in front of a home audience in Galway 1969.
The Masters coxed Four at Prague World Masters 2002.
The collected spins in the double Scull with Gerry small summer of 96.
That quad scull row from Galway to Cong in 3 1/2 hours October 1997.
And, by proxy, seeing my daughter progress through a series of Irish
Championship wins and onto the international stage and competing
successfully with the best of the world’s best.

When we returned to Galway after 15 years abroad, the rowing community was there to help us slot in seamlessly.  We have a shared experience and a shared respect.. Long may that continue.

WHY I ROW – Melinda Szuts

WHY I ROW – Therese Moylan
Scroll to top