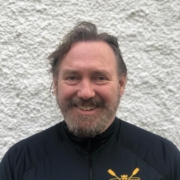 Why I Row Interview 20
by Michelle Conway/December 2020

I first began rowing in 1983 I was in 3rd year, my mother wouldn’t allow me to join in first year or second year over safety concerns, and she had heard a few stories about Fr Eddie Diffely S.J., I tried to reassure her that a rowing boat couldn’t sink, to which she replied “that’s what they said about the Titanic”. Fr Kennedy O Brien S.J. joined in 1983 and I eventually got permission to join the rowing club, and as the saying goes, I found my tribe! My Mother pretty much joined the club as well, and herself and Fr Eddie became the best of friends!

At School I used to play arcade games in Salthill during lunch time with Ross O Connor, we would never leave enough time to make it back to school. So, I kept having to run faster and faster to make it back in time. Ross was already in the rowing club and would constantly say you’re fit enough to row you should join. So, it was friends that started me rowing. Once you are in a competitive crew it was impossible to stop.

I regret I never stayed rowing after school. And it wasn’t until my Son Thomas joined Colaiste Iognaid rowing club 7 years ago that I got involved again in rowing. I was in a launch with Eamonn Colclough and he encourage me to join Tribes and get back on the water. The only rowing I’m doing now is if the launch breaks down!! But 2021 here I come!

3. Have you a favourite seat?

In an 8 I love the 6 seat the power house the feeling of speed and power is absolutely awesome, but when an eight is going well any seat is great!

In a quad I actually enjoyed stroking, but I think it’s because, I’m unfit, and can spend more time on the recovery.

In Junior rowing, it was being moved up from a junior 16 crew into a junior 18 crew, I was a bit lost, leaving all my friends and we had also enjoyed some success at regattas. I was now rowing with an older crew I didn’t know, and not that much regatta success. But a few crew members took me under their wing, and I settled in, and then Joe Ryan also moved up into the J18 crew, and we both had each other’s back. Billy Lawless was our coach and gave more than 100% to our club for many years. The whole experience, built character as they say!

Every race I rowed presented a top challenge.

Other top challenges included becoming Girls coach in Colaiste Iognaid, I had been out of rowing for many years and the rowing technical model had changed from when I rowed, however I had great support from all the coaches in the club, and the young athletes were fantastic.

My current top challenge is every training session Its very important not to get too comfortable in how you coach, every crew is different, its very important to listen to the crew, be athlete focused.

As a coach I have a big interest in sport psychology, what makes one row, go well, and another not so well. Rowing is such a physically demanding sport, yet races are won and lost in the head. According to Pocock the coaches’ job is to impart the secrets of this special kind of endurance that comes from the mind, heart, and body.

We can use the term “doing my best”, too lightly, if the question arises “Is this my best?” then its not your best.

As a junior 16 I remember a sprint regatta in Lough Atalia, it was a J16 500m sprint Fr Kennedy O Brien was our coach, and he had us all doing, a full warm up routine, which we thought was very professional, the Bish lads didn’t think so and likened us to monkeys let out of a cage. I can still feel the acceleration from the start we were out in front and that drove us even faster, I’m sure someone could have skied from the back of our boat that day. Look it up on you tube, it’s a thing!!

Junior 18 rowing on the Thames being coached by Noel Casey Olympian coach, the only glitch was when one of the lads asked to stop so he could take a pee out the side of the boat, you couldn’t take us anywhere.

The first row I had with tribes stroking a quad being coxed by Gillian. At one stage Gillian said there were 7 different times at the catch, it still felt so good to be back on the water.

As a coach any race where the boys or girls come off the water with a big smile knowing they left it all on the water win loose or dead heat!

I love the Connection, the only way to achieve the perfect stoke is to be fully connected.

Its all about been in the present, in a crew boat you can lose all sense of your individuality, you, the oars, the boat, the crew, are all one unit fully connected together.

Most of all I love the people the generosity of coaches in sharing their knowledge, in giving of their time freely. The young Athletes and how you can see their confidence grow, most don’t realise how good they actually are, and watching them look out for each other, most teenagers are extremist they don’t do moderation very well, so let that be play station ,partying, or rowing, give me rowing every time!

“Winning medals is good, racing is better, loving the sport is best”

WHY I ROW – Therese Kennedy