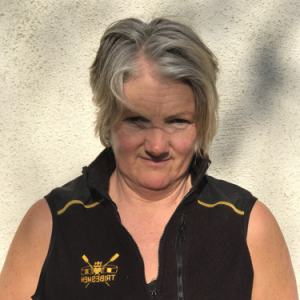 Why I Row. Eithne Cunningham.

Occupation: Dangan House Nurseries. I opened a Tea Room 7 years ago and manage the Tea Rooms along with my co-workers.

When Did You Begin Rowing?

I began rowing about 8/9 years ago with Tribesmen, pre Tour Boats.

I am from a small town in Tipperary.

I have always been involved in sport. I played Camogie, Football, and Handball at various levels. I also was involved in Athletics as a cross country runner mostly. I came to Galway in the early 80~s and got involved in soccer for a few years, played a lot of 7-a-side competitions. One stands out as we refused to play a final unless we got a proper pitch, not a swamp. We stood and watched the ref blow whistle and give game to other team. That was a proud moment for me, defending womens’ sport. I also did a few maracycles with Co-operation North. A southern bunch cycled from Dublin to Belfast for a social gathering in Queens and back to Dublin next day with the Northerners for a fun evening in RDS. This was pre-motorway and after 6/7 years the event was cancelled due to a traffic accident involving the death of a cyclist.

My kids also played various sports. On the sidelines of the Galwegians’ rugby pitch, a pal suggested I try rowing. I liked the idea of trying a water sport as we are surrounded by it. When the time was right for me, I tried the rowing and still am.

Do You Have a Favourite Seat?

At this stage of rowing, I have experience in most seats, steering, stroking, middle of boats and also coxing. Now any seat in any boat is a good spin.

What was your Top Challenge?

Competing in Bled at the World Masters and learning to row straight in lanes.

What is the one thing you would like to learn/ improve? Top Goal?

I would like to improve my sweep rowing and to continue to be a competent rower.

Heading up the river and out onto the lake on a calm day.

What do you love most about rowing?

The friendships, the coaching, the fitness, and the wonderful buzz I get from it.

WHY I ROW – Eamonn Colclough

WHY I ROW – Paul Hornibrook
Scroll to top