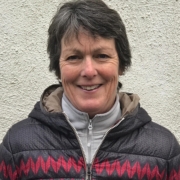 Why I Row Interview 19
by Michelle Conway/November 2020

I started rowing in 2011…..imagine 9 years ago! I had missed the Summer Recreational Camp that year but got an opportunity to start in October…not the easiest time to start learning to row I might add but I grabbed it!

I have played a lot of Sport over the years and have had to withdraw from some endeavours due to injury. Rowing had always eluded me. I remember watching rowers on the Foyle in Derry when I worked there in the 80’s and was in awe of the grace and speed with which the boats moved. Having the Carolans as neighbours and friends in Carragh needless to say played a part in being recruited and subsequently ‘caught’ by the bug!

3. Have you a favourite seat?

I usually find myself in the middle seat of a crew boat. However, I do enjoy stroking a Double and have an equal grá for the Single but always with company. I am enjoying recent exposure to Sweep again having been reacquainted with it after initially dismissing it when I started to row due to injury.

My top challenge came very early in my rowing career. Tribes travelled to Paris in October 2012 to row in the ‘Traversee de Paris et des Hautes de Seine’ just a year after I d started. I was a total rookie! Breakfast was at dawn. Our cox, Eithne Cunningham had slept in (that is a whole other story) and our boat was very old with wooden oars and handles. Fortunately, we had a replacement cox albeit a few pounds heavier than Eithne! He, AKA Joe Goulding arrived for duty in his chinos and leather shoes…the poor man had been woken from slumber and no more than me looked terrified at the prospect of what was ahead of us.

All 200 boats that’s 1000 people bobbed up and down awaiting the start. I remember the starter boat flitting around with what looked like a tiley lamp in the middle of this milee. John my husband who was in the boat with me commented that it looked like a scene out of the film Titanic! For a brief moment we all laughed The Deegans, The Kennedy’s and Joe. Then it was back to jostling for position and I heard the countdown commence Dix Neuf Huit Sept Six Cinq Quatre Trois Deux Un and we were off!

What followed apparently, as I saw nothing except my poor blistered hands trying to keep the rhythm with my fellow crew members, was a 28km scenic tour of Paris from the Seine passing The Esplande des Invalides, the Tour Eiffel, National Assembly , the Quai d’Orsay, Notre Dame and of course the 33 bridges, how could I forget them! We had one or two stops for food or blister treatment but no sooner was the Protein Bar unwrapped or the plaster just on the torn skin than out would come the command ‘All 4 Ready Row’ . I thought it would never end and every part of me was on fire. I couldn’t wait to get out of the boat but our wonderful cox in fairness wanted us to look good on the home straight so the command to ‘Strike’ was uttered so many times I thought I ‘d loose my mind! I remember feeling just get me off this bleeding boat. My colour when I stood up prompted a holer from Sean Carolan to ‘Get that Woman Sugar Fast’

A few hours later after enduring an excruciating shower with 12 blisters on my hands Said Woman was drinking a glass of Champagne and cheering Donegal to an All-Ireland Win over Mayo.

I would like to understand the mechanics of the boat a little more and know how this contributes to making the boat move. I am like a dog with a bone when I learn something new and welcome the sense of achievement when I can see the changes that happen with new learning. We are always learning, and I have a long way to go before I master even a little of this wonderful sport.

Not Paris! However, I think it could be a favourite spin and I hope to return some day soon and enjoy it in all its glory. I loved the tour on the Liffey when we roared under every bridge on our way down to The Point. Equally the Shannon and up to Ard na Crusher was a great spin. Graguenamanagh and all its beauty, The Bann, Moissac, Germany and the row to Annaghdown where we ate Prawn Cocktail for breakfast as I thought we would not get there before lunch have all been amazing experiences. For me however, the spins on our own river Corrib up to the lake or over the Old River on a flat calm day in a crew boat in a single or double or more recently in an 8 give me the most joy.

Short answer ‘The Switch Off’. Having to concentrate for that catch, that balance, that drive, that wonderful feeling of achievement when it all comes together.

Having had some surgeries over the past few years it is so uplifting and heart-warming that you can return to this sport albeit a little more Bionic than before and pick up where you left off. Of course, none of that would be possible without the support of folk who encourage and help and ultimately get you back in the boat.

But surely that is the essence of ‘Club’.

WHY I ROW – Gerry Small

WHY I ROW – Noel Hume
Scroll to top