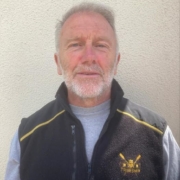 Why I Row Interview 16
by Michelle Conway/July 2020

I started rowing in September 1968 ( in the last century ! ) I remember the beautiful boathouse smell and the first row. I loved it from that first moment.

The French teacher in my secondary school ( CBS James’s St Dublin ) was a member of Commercial RC Dublin. Commercial at that time was going through a bad patch and had only one crew, a men’s novice 4. In the previous few years they had no crew. Commercial decided to start junior rowing to help revive the club.

The French teacher asked if anyone in my class was interested. I was playing football and hurling for the school at the time.  A lot of our matches and training was in the Phoenix Park and from the park I could see the crews on the river. I had always loved boats so I jumped at the opportunity.

I rowed with Commercial at schools level and men’s junior and senior levels from 1968- 1973. I rowed with Eamonn Colclough in many crews. I served as Captain of Commercial in the 1972 season.

I missed the Irish 1974 season as I was in the USA but I had some rows over there with New York Athletic Club.

On 3rd Feb 1975 I moved to Galway. I was very lucky as at that stage Eamonn Colclough has been commissioned into the army and was posted to Renmore Barracks. Eamonn was rowing with Galway RC.  On my first day at work I got a call from Coke and that night I started training in Galway RC. I got a place on their senior 8 for the 1975 season.  I rowed in the GRC senior 4 for the 1976 season and we teamed up with Sean Carolan’s 4 in Neptune to form a composite 8.

In Dec 1976 a group including Eamonn and myself formed Tribesmen RC . The rest is history!!

I love the two seat in a four and the four or six seat in an eight. In the pair I like the stroke seat. Although Coke reminds me that I never get the rate up high enough for him.  I have rowed with Eamonn for over 50 years. I look forward to his return when his hip is sorted.

The season of 1976 was my biggest challenge. The composite eight with Neptune in 1976 went well but we just missed out on the Senior 8 championship beaten by Trinity who subsequently went on to win in Henley. It was really disappointing as we had beaten Trinity on several occasions through the season.  Regrets !!!

In rowing, like a lot of things, you are always learning. The fact that I have been rowing for over 50 years means nothing . I am always trying to have the “ best spin “ ever.

In the past few years I started sculling. Sculling really brings you down to earth ( or into the water as I have experienced !! ) as regards rowing ability but it is fantastic when it comes together ( even for a few strokes). It makes all the effort worthwhile.

It is very important that we all enjoy being out on the river no matter at what stage of rowing you are at – a beginner or, like me, an aged veteran. The river is such a wonderful place. We are blessed in Galway to have such a facility.
No matter if you have a good or bad spin it is a privilege to be able to avail of the beautiful river, it’s surroundings and to hear the cuckoo each season. I feel it is very good for both your physical and mental health.  I savour each row.

As Eamonn mentioned in his interview some time ago it is in a pair on a calm evening around sunset with the sun going down over the hills of Connemara. You push hard going down a deserted Menlo Straight as the boat cuts through the calm water and you feel and hear the boat running well between strokes. Bliss !!

The people. I have met lifelong friends through rowing. When I came to Galway I already knew so many people here through rowing. When you go abroad if you go to the local rowing clubs you have an immediate bond.  It has allowed me to have rows in places like US, UK, Australia, France and Germany all of which were great experiences.

Rowing has given me great life experiences.  In my early rowing days it showed me the importance of commitment, discipline, timekeeping, how to live with disappointment etc. I think this has helped me in my later life.

Rowing is a fantastic sport and pastime. Rowing has had a huge positive influence on my life.  Long may my rowing career last !

WHY I ROW – Interview 17
Scroll to top