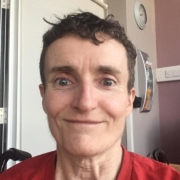 In 1977, Galway Rowing Club took on a group of 5th year friends (Cassan Watson, Cindy Corbett, Ann Marie Horan and me) who were interested in rowing. We rowed in a clinker-built four called “The Menlo”. In 1979, I was in two minds about trying again, but decided to give it ago and joined UCG Boat Club in 1979.

A lot of my family had rowed, and I heard my dad and brother, Mike speaking a strange language full of riggers, stretchers and stakeboats. It maddened me to be excluded by not understanding what they were talking about, so I wanted to try rowing to find out. In first year in college, Ann Marie said she was going to join the rowing club. I joined with her. As it turned out, she ended up spending a lot of time with the Drama Society instead and became an actor: I went down to the rowing club, and became obsessed.

I loved rowing 5 in eights and 2 or bow in fours. Five is the link between bow four and stern four.

Really, the biggest challenge for the women in UCG then was to win a championship. Winning the novice women’s fours in Coleraine in 1982 with Mary Reidy, Norah Gallagher, Teresa Hanley and Catherine Lee (Coached by Mike Reidy) was a reward for  huge amount of hard work and persistence.

Improving technique, and actually getting on crews. Rowing pairs and single sculls really helped with technique: avoiding a sudden dip in the river was very motivating. I am small, but being able to row on  both sides helped in making crews.

That was a flat calm summer evening in a double with Aideen Henry . It was one of those times when everything works, and the boat sings under you.

The good humour in the crew after a good spin; the feeling after a good race whether you lose or win; passing the Graveyard in spring when it is coming together; bright summer evenings at Menlo Castle after intervals; getting a fast start and staying out; seeing the rising sun reflected on the water above the Iodine in early, early spring and getting the first scent of the new season.

WHY I ROW – Márie Connolly

WHY I ROW – Jim Silke
Scroll to top