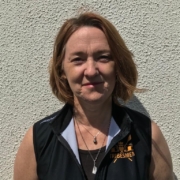 Why I Row Interview 14
by Michelle Conway/May 2020

I began rowing in college with UCG in First Med and competed in novice eight crews. We had a few memorable events including the Erne head and Athlone regatta. There was a break of a number of years when I lived in Geneva where work with the UN and three kids made it difficult to commit to rowing. I returned to rowing 6 years ago joining Tribes after my daughter Katie began to row in first year in the Jes.

My dad Pierce had rowed with the Jes and we used to watch the Galway head of the river together when I was in school. He was on the first schoolboys crew to win the Maiden eights championship beating Commercial and Garda in Cork in 1958. He turned 80 last week and still comes to watch races. Having spent 15 years living abroad it meant a lot to see Katie rowing on the Corrib following my dad’s footsteps.

I rowed in two in the eight in college crews and still enjoy that seat. It’s great to see the symmetry of oars in front of you and feel the sense of speed from the bow of the boat. I also enjoy stroke, it’s an honour to be given the responsibility to set the rhythm and lead a crew but it is more pressured. My other favourite seat is stroke in a double, many great spins with my doubles partner Emer Curtis who also joined the club in May 2014.

Competing in the Erne head last year with torrential rain and force 8 gusts on the 6km course requiring military like manoeuvres from our cox was a feat of endurance. We had decided to just row the course as the conditions had got treacherous but then discovered we had won the womens Masters 8+! Rowing in a double with Emer in Castleconnell head when all small boats had been cancelled just after we had slipped was another exercise in survival and management of fear. Our success in the Masters doubles race at Lough Rynn regatta in May 2017 where our medals were presented by the newly appointed President of Rowing Ireland was not to be repeated!

Rowing in the Irish national championships in Masters eights in 2017 was nerve wracking but we managed to win our race with Katie coxing the boat. Rowing at World Masters at Lake Bled in Slovenia in 2017 and Lake Valence in Hungary last September was also challenging. Tribes had the fastest club time in the E8+ race and we came fourth in the D8+ in Hungary. I can still feel the terror as we got on the stakeboat for the D8+ race with Matthew Pinzent as starter. Rowing in a mixed eight E boat in Hungary was another huge challenge, we led the 8 crews at 500m but a German/Russian crew came through us in the last 20 strokes and pushed us into second place. The power and speed of the boat was exhilarating but scary at the same time.

There are many things I would like to improve…. my flexibility, fitness, technique, power in the boat… where does one start!! Credit goes to Sean Carolan for his patience and forbearance over the past few years… coaching Masters crews after years with school and college crews is not easy. Would also like to do more single sculling, two training camps in Seville were a big help but the Corrib is a more challenging river.

One magical early morning spin in a quad with fog lifting from the river is particularly memorable. Training sessions in an eight before events when the crew comes together technically are very rewarding. Evening spins in the summer with the sun setting have also been some of my favourite spins.

I love the river, the sound of an oar in the water, rowing with your eyes closed tuning in to the balance of the boat, the harmony with your crew when the boat sits and runs under you, the beauty of the lake on a calm morning, the colour of reeds in the evening sun, the sense of achievement after tough pieces to the lake and a few minutes break to get a drink of water…. pure bliss. I love the camaraderie on the slip, the BBQs at Tribes and Corrib rowing club, the tours on the Bann, Barrow and Nore, the heads in sub-zero temperatures in Carrick, the sunny regattas in Neptune and Trinity, the trips to Moissac and slip stewarding in Lough Rynn on a glorious summers day. Masters rowing is a wonderful team sport where you can appreciate the beauty of our rivers, maintain physical fitness, row in tour boats, compete in races, take part in weekend trips, and enjoy the company of an amazing group of people who share a love of rowing.

WHY I ROW – Kenny McTigue

WHY I ROW – Barb Geraghty
Scroll to top