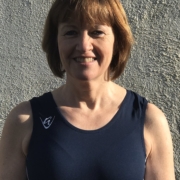 I started rowing in 1999 with Tribesmen. I rowed for about 3 years back then until becoming pregnant and didn’t return until 2016! Having a small baby and a husband who worked weekends meant I had to put the rowing on hold. Many times during those intervening years I yearned to return but on bumping into Gillian in the Winter of 2015 she said the magic words “ You can row now when suits you, we have a Whats App group” .That was it , I went back straight away, I was hooked again. I even signed up for Moissac after my first day back on the river! However going back to my initial period of rowing the club was so different to how it is now. The focus was on junior rowing and competition. Masters rowing was virtually unheard of in Ireland. Certainly there was no recreational rowing and not a tour boat to be seen. The numbers of club members were low but I remember a vibrancy that the teenagers brought to the club. Gillian was instrumental in building a small crew of older female rowers, some of whom were ex rowers and some newbies like me. Without her, I firmly believe the structures would not be in place that went on to develop the club into the facility for older novices that is today.

I had always wanted to row. I grew up in Dublin in a family that was heavily involved and still is to this day, in water sports. As a young teenager I looked longingly at the rowing clubs on the Liffey as I was driven to our Kayaking club further upstream. The idea of using your whole body to propel you along, rather than just your arms as in kayaking, really appealed to me. I moved to Galway in 1990 and made some enquiries whenever my path crossed with ex rowers! The answer, however was always that I was too old! There was no way to row other than at schools or college level. I then became friendly with a woman my age from Hamburg , she had rowed in college, her father in his 80’s at the time still rowed in wide stable boats, she was convinced we could get rowing somehow. So together we set out and called on foot to every rowing club in Galway! Not realising some were schools clubs! We were undeterred.

Then we struck it lucky! One person said to us “ You need to go to Tribesmen and speak to a woman called Gillian ”. Well that’s where the rowing journey started for me. Gillian welcomed us to a crew of 8 women. I was put in a wide Trimmie(learners boat) on the canal for 20 minutes whilst Noel Leader showed me the ropes and then straight into a fine boat! During the next 3 years we rowed only at weekends, there was no Whats app, no mobile phones, we just agreed on the slip each week who was available the following weekend. We only had the use of specific boats when they were not required by juniors or other competitive rowers. Gillian, however was amazing. She coached the likes of me from within the boat, sitting behind us, quietly and calmly imparting her knowledge and skill. I never once set eyes on Sean in those years!. He was at home minding the children no doubt! Indeed we were never coached from a launch . The coaches concentrated on the juniors.

However thanks to Gillian’s drive and determination she moulded us into a reasonable crew and we competed in a number of events. Our first event was The Galway HOR . It was a great event, Galway thronged with boats and trailers, crowds on the bridge roaring on the crews. Getting confident we headed further afield to Belfast where we stayed for the weekend with Gillian’s rowing pals and we competed in the Belfast HOR. We also raced at Castleconnel. Out of interest the women on our crew during those years were, Gillian, Norma, Deirdre O Hara, Breda Leader, Olivia Roxby, Anne Ryder, Christiana and Myself. Gillian’s daughter Katie was our able cox.

Any seat from where I can view the College Senior Men’s 8’s testosterone fuelled muscles and hear their synchronised grunting!!!!

My top challenge was undoubtedly competing in The World Masters in Bled, Slovenia in 2017. I was back rowing less than a year when the opportunity arose to train for this event. I am competitive by nature and I love training hard. So I signed up enthusiastically. The event was amazing, the closest I’ll ever get to feeling like I was in the Olympics!! So well organised, ran like clockwork and in a beautiful setting.

I have technical elements of my stroke that I am aware I need to work on. Finishing with hands level, extracting both blades together whilst sculling and Sean could add a few more to that list! I watch a lot of instructional rowing videos and I’m aware of what is required to row well, however putting it into practice is a challenge.

I have many!
The first was racing an eight in Bled. We were lucky to have the UCD Senior Men’s Eight’s Cox. She was very experienced and I remember sitting on the starting blocks listening to her voice as she asked us to hand our nerves over to her and to tune into her voice and hers alone! It was like having a yoga lesson! We went on to have the row of our lives, we were in contention for 3rd place for a lot of the race, I couldn’t believe my ears when the cox said “ We are fighting for 3rd place”. Unfortunately we didn’t have the gas to take the place but I remember punching the air as we rowed over the line because in my mind we had indeed won, we had done amazingly well to be even in contention for a place! I was delighted for Sean, our coach, as our performance validated his dream to bring a group of middle aged novice women to compete at this level on an international stage!

The other was when Barbara and I first got into single sculls at Dangan slip. It was a Summer’s Day, the river was flat. Peter Cassidy very ably took charge of us and Sabrina kindly took a video. It was a wonderful feeling to stay dry and to share this experience with Barbara!  I am lucky to have videos of both the above spins and often over the years I view them and they never cease to bring a smile to my face!

A high from my previous rowing period, going back to 1999, might deserve a mention. I was only rowing a few weeks, probably been in an eight on one occasion when the Michaelmas Cup was held on the Corrib. I was instructed to follow Sean Heaney over to GRC to take part. As he was putting me into an eight he asked me “ What side do you row bow or stroke?” I hadn’t a clue what he meant, so thinking on my feet, I said “both” !! Well, with him stroking the boat, needless to say we took off! I managed to keep up somehow and when I got out I was on such a high that I ran all the way to the prom then ran all the way home and rang Gillian from my landline ( no mobiles!) to say “ I’m on a high how do I come down”? To which she replied “You don’t”!! I’m still on that high!

To me there are lots of things I love! I absolutely thrive on exercising and staying in good physical shape. Exercising outdoors in the fresh air and witnessing the passing of the seasons and nature on our beautiful river is also very special. I am also gregarious by nature and value all the wonderful people I have been privileged to get to know and share this wonderful sport with. Additionally I love the possibility of finding myself rescued from the reeds by Italian men on white horses, I mean Cats!!!!

WHY I ROW – Interview 13
Scroll to top