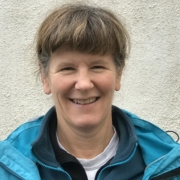 I began in NUIG way back in 1982. I rowed there for two years, and finally returned to it in the early noughties, thanks to Gillian Carolan.

It was all about a boy. One of my pals really fancied a rower, so she convinced myself and another pal to join UCG rowing club. Then we all got hooked and the boy was forgotten… After rowing for college, I never thought rowing could be done on a less competitive level, but along came Gillian, who was looking for someone in Galway to train with herself and Breda Leader for the Head of the Charles, and that was the start of a whole new adventure!

We only did sweep rowing in college, and its still my favourite. I have a tendency to end up in the bows or the stern on bow side, as I was never big enough for the middle of the boat, and its still where I like to be most.

There were lots! Probably getting back into a boat again after many years was a big one. It took a while to figure out how to row again(I’m still working on it..) and get a bit of confidence back. The first time we went to a world masters, which was in Vichy France in 2003, was another big one. Four of us trained like mad, while all juggling busy jobs and small children. I was terrified at the start of the first race, but it was an amazing experience, and brought us to a new level.

You are constantly trying to improve.. There is always some part of my stoke that is not right, and it is a never ending quest for the perfect stroke, done as many times in succession as possible! I would like to work on improving my single sculling in 2020, I will put that down as my aspiration and hope it doesn’t come back to haunt me.

Again there have been lots! For me favourite spins are when the boat moves really well, everybody gels together, and each stroke powers the boat thru the water. I remember Athlone Regatta in 1984 when we had one of those spins in a four, and we beat Queens elite crew. It was better than winning the Irish champs that year, because we rowed the very best we could. But some of the best rows have been on our own lovely Corrib when sometimes a training spin just came together and you are on such a high at the end of it. Other favourite spins have been on some of the great trips I have been on over the years. Cahors in France for scenery, the head of the Charles in Boston for a fantastic event, Ardnacrusha Lock for bragging rights, Sacramento because we managed to get there and it was the first time I saw how Masters rowing was becoming such a big sport…(ok Im definitely name dropping now)

I love being on the water, I always try to just appreciate being outside, on a river or a lake or where ever at some stage during a spin. I love how it makes my body fit and strong. I really love that I have met so many amazing people over the years because of rowing. It really changed my life and I am forever grateful for it. I have fantastic friends and we have traveled all over the world to fantastic places, which would never have happened without rowing. I am in awe of all the brilliant women and men in the club that have learned how to row over the last number of years. I now watch people that probably once thought a rigger jigger was something rude, and didn’t know a nut from a washer, now competently unloading a trailer, putting together and rigging an eight and setting off up a head course (like we did in Carrick this year) without a bother.

WHY I ROW – Interview 11
Scroll to top